After the 2004 tsunami in South India, reconstruction efforts leveraged the humanitarian gift of inland housing to relocate the artisanal fishing population and privatize the coastal commons. But the task of securing a spatial fix for capital accumulation failed. With keen ethnographic insight, Swamy shows how fishers sustained their claim to coastal life and livelihood while transforming humanitarian gifts into assets. Challenging assumptions about its depoliticizing and disciplining effects, he argues for humanitarianism as a contested process that can reset the contours of economy and politics.

This rich, multi-level ethnography brings together a rich ethnography of a fishing community in India, with the largely separate literatures of humanitarianism, disaster studies and development studies,and offers new ways to help poor communities to remain political agents in the face of the forces of neo-liberalism.

The day after Christmas, 2004 a tsunami annihilated thousands in the fishing communities of a coastal area of southern India. Mostly self-sufficient, they were not heavy contributors to the GDP so the government and NGOs had a blank slate to incorporate the area into the global neoliberal economy with a port and a tourist destination based on a long forgotten 17th century Danish colonial outpost. Brick houses inland would replace the flimsy structures people had built with local materials. But people would have to renounce any claims to land along the seashore so ‘ . . . the desire to remake shattered lives on the coast came into conflict with a reconstruction plan that demanded their eviction.’ Three years later, anthropologist Raja Swamy has assessed the result in Building Back Better in India. It is a complex story of relations among NGOs, layers of government, local people, and distant masters and markets. This book can help us understand how the responses to the 2020 COVID-19 set the interests of the powerful and wealthy over all others while telling us that our own wellbeing is central. The book is a timely story of disaster capitalism in action.

One of the books of the year in 2013 was Sonali Deraniyagala’s Wave, a haunting memoir of utter loss after the 2004 Tsunami. Raja Swamy’s Building Back Better in India is its complement. Through grassroots analysis and rigorous analysis, Swamy shows the long term horror of disaster capitalism. This probing inquiry into regimes of non-governmental regimes of governance, and the neoliberalism embedded in modern philanthropy, should be required reading for anyone involved in disaster relief.

Fish drying on the beaches and dunes of Nagapattinam 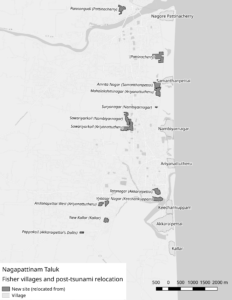